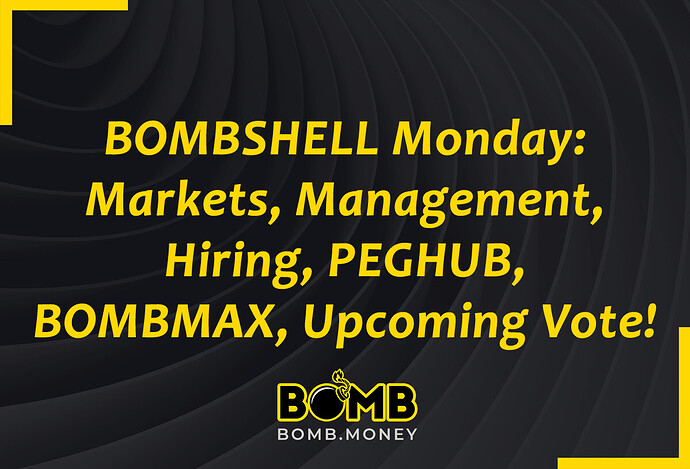 What a wild week its been for not only BOMB but also for crypto as a whole! I’ve got quite a bit to discuss today so I will keep certain items brief, and leave most of the article for the exciting things happening soon.

Markets have been extremely disappointing for the last few months, and I’m hoping this recent, very hard, leg down is the last before we get our bounce.

Anyone who knows me, will know I don’t focus on things I cannot change, and will continue to build and create value for all ecosystem participants! Let’s use this bear market as an opportunity to keep earning and building our bags for the inevitable 10x off lows we will see in the future!

I will keep this brief, as I’d rather focus on the positive news today. My previous partner, Dan Handford, has stepped down.

I feel it is important for the entire management team to be transparent, and their actions should be very similar to what they are portraying to the community.

I very rarely check trades, but I had noticed a very questionable BOMB sell a few weeks back. This was addressed, he apologized, and we both moved on.

Last week I was getting numerous complaints via DM that Dan Handford was selling down certain assets very aggressively, mainly the CZshares token. While some in the community thought, “Well what’s wrong with him selling or taking profit?”. This is valid, except what he was doing was far beyond a little profit taking.

As most of you know, the share tokens (BSHARE, CZSHARES), are the tokens you hold when you have faith in the protocol, and the protocol recovering lost pegs, etc. Dan Handford was getting a percentage of CZSHARES from the dev allocation I receive. Anyone with a large position in the protocol, who believes in it and cares about its success, would not be ruthlessly selling the share tokens down until they have 0 left. For comparison, even though I get a larger share of the dev allocation than he was getting, I still had over 350 CZshares (between the farm and boardrooms) when he was down to 0.

Anyone looking at my wallets will know I believe in the protocol(s), and will see I only buy assets under peg, never sell. Share tokens I sell when I need funds for expenses, or to take some profit when they are moving in the right direction. I certainly do not dump massive amounts of share tokens while they are already moving downward, as Dan Handford was doing.

When confronted about the accusations of him preaching to the community how great CZshares were, and then dumping CZshares the same moment, he did not have very much to say. He went quiet most of the day, then provided a short message indicating he was resigning. At the same time he dumped the remainder of his BOMB and CZSHARES assets.

Perhaps the biggest issue for me was that anyone who glanced at his wallet and saw 0 CZshares, and an EMP position bigger than his BOMB position, would really second guess wanting to invest in BOMB. The few people I showed the wallet to all agreed this would have changed their mind on investing in BOMB.

Dan Handfords dumping harmed me and my positions more than anyone else, and I must say it was quite unexpected. I was very generous with Dan Handford, and that generosity led to a big dump on myself and the entire community. Luckily his bags were not that big, and we can move past this easily.

I didn’t intend to talk about the situation that much, but also feel it was needed for full transparency on the issue. We will get back to being 100% transparent, as this seemed to not be a priority for Dan Handford. I apologize for this and promise we will be right back on track now that the full management team (me for now), has the community and our investors interests as #1.

We need to grow our team! If you think you could be beneficial to BOMB in any of the following (rough) roles, please reach out to me via email at aaron@bomb.money

Alright BOMBERS and PEGGERS, this is the big announcement everyone has been waiting for!

Because certain aspects of what I am about to mention will take a few weeks to implement, I am going to leave out some details to prevent others from trying to do it first. In other words, I think this announcement is BULLISH AF as it is, but many juicy details, or our “secret sauce”, is not going to be mentioned quite yet.

PegHub is the new name for the entire collection of BOMB Money created algocoin protocols.

I strongly feel that CZPEGS is a winning recipe, despite its current peg status. I am going to be creating numerous protocols similar to CZPEGS on other chains in the very near future.

We all know that when you believe in the strength of an algocoin protocol, you buy the share tokens of the protocol.

But what about when you believe in the entire ecosystem of protocols, and want a share of the revenue and the ability to vote on key ecosystem decisions?

The PegHub token is an overall ecosystem token which will allow staking to receive a share of the revenue generated from BOMB, CZPEGS, numerous additional algocoin protocols to launch within the next few weeks, as well as revenue from BUSM.money and our tarot fork. In many ways it will be similar to the Beefy token (BIFI) and Yearn Finance (YFI on ETH) in that it will have a limited supply, and a goal of ever-increasing value with constant buybacks. Just like BIFI, we will earn revenue from numerous chains, which will all go to token buybacks, to feed the PHUB stakers yield.

I have written the first version of the whitepaper which explains the tokenomics and details on how revenue will be generated. It can be viewed here: https://www.peghub.com/docs/peghub-tokenomics.pdf

There are two core reasons for launching the PHUB token:

Of the 10,000 tokens that will be minted on creation, 6,000 will be available for purchase via our ICO. Details of what will happen with the other tokens can be found in the whitepaper.

We expect the ICO purchase page to be ready by Friday, June 17th at the latest. It will be at https://peghub.com when ready.

Pricing & How It Impacts BOMB

PHUB token will be purchasable with only BTCB and BOMB. Couple key differences will make BOMB the obvious choice to use to purchase PHUB until BOMB is at 1.1 peg.

I anticipate that this token will go well beyond its ICO price of 0.01 BTC (currently about $235). In addition, I expect our future of algocoin protocols to be extremely lucrative, and am happy to share the revenue with PHUB stakers instead of it all coming to the management team.

This should get some aggressive buying on BOMB, and I foresee BOMB being at minimum 1.1 peg once the ICO purchase page is live in a few days.

We will be offering a full fledged Tarot Fork for all other protocols to participate in. We have an early version of the site up at https://app.bombmax.fi. 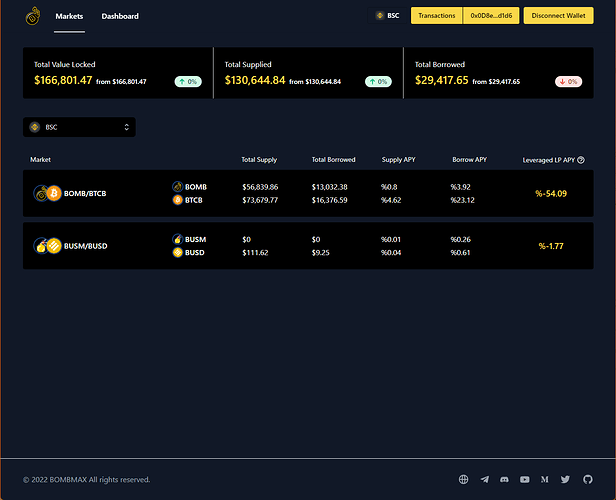 This site is functional now and hooked into the same contracts as bomb.app.

We will develop this out further, go multichain, and anything else needed to make it a big success. As well, we require another project manager to handle this division of the BOMB / PEGHUB ecosystem. Contact me if interested!

Many have been asking about our new UI at bomb.app. While I think certain aspects of it, we hit the nail on the head… Other aspects I am not crazy about how they turned out. I had a lengthy discussion today with our all-star dev Dimos (DNNA in socials), and we had some good ideas on how to address the problems I found.

We will likely remove the leverage aspect, and allow that functionality to be done at our full tarot fork (bombmax.fi). We will leave the BOMB UI to be really geared to new users without the complexities of borrowing and leveraging. In addition to this, we are open to suggestions on how to make it more friendly for brand new crypto users. We have a couple good ideas in mind, but always welcome community feedback!

Alright, let’s keep this brief as I’ve already written too much for one week!

For a while now I have wanted to get BOMBs reward allocations largely back on the two core farms. It seems the community is on the same page with this, as it has been requested numerous times.

I will be proposing a vote in the next day or two that details new farm allocations. Likely this will be:

If you have any other ideas about the allocation, please let me know in our discussion forum at https://forum.peghub.com.

No matter what the markets want to do, we can build successful projects that can earn us all passive income. The bear market should be welcomed, it is a great opportunity for us to grow our bags cheap! Bear market only stops us if we let it stop is, but #BOMBERS are far too strong for that!!! BOMB ON!

The only based boy,

Regarding the upcoming vote, what is happening to the allocations for ACSI Maxi Farms and also BBOND Farms?

The vote would remove reward allocations from them if it passes.

Its critical for us to grow to have the highest APRs on the farms that are seen by the most potential investors. We have plenty going on to be able to eat the odd sell, or to handle some selling if guys move from 80/20 to 50/50. We need to look at the big picture and how best to get to success. Keeping those pools around is causing more harm than good at this point, IMO.

They served a great purpose though, at the time!