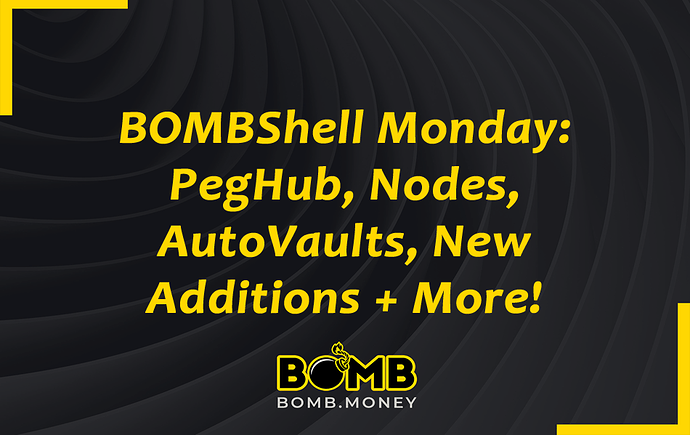 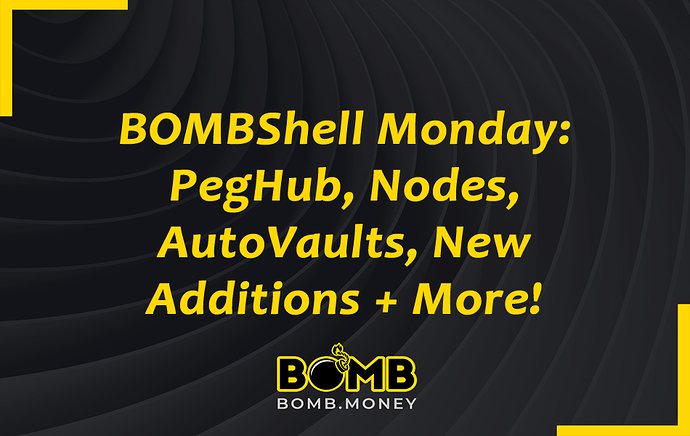 I hope all the Fathers out there had a great Father’s Day yesterday! I took a much needed break from my 24-hour work days and spent some relaxing time with family — I hope others were able to do so as well!

Lots to talk about and I only left myself a few hours to write this BOMB Shell so let’s get right into it!

First, let’s go over some of the events from last week.

We launched nodes on BOMB.money Tuesday last week. For an unexpected launch with zero announcements, no hyping, and no marketing, they did exceptionally well!

The PegHub presale was a huge success! Thanks again to all who participated! I am sure anyone entering PHUB for the long term will be set for life! More about PegHub later in the BOMBSHELL.

I wanted to provide some clarity on the SuperBOMB project which I had mentioned in the livestream Wednesday last week.

This project is not within the BOMB Money ecosystem. It is a side project being run by Diamond & team.

Here is a message from Diamond regarding SBOMB:

Considering the liquidity issue that has occurred, we spent a lot of time debating and organizing a new deployment and proper presale. A lot of community members have spoken up about the potential pitfalls of running this project with the Bomb branding and how we should concentrate on getting Bomb back to peg. We pride ourselves on transparency and listening to the community so we have decided to stick with the current SuperBOMB and have myself (Diamond) and my team work on more pressing matters while still trying to have a little fun with it as it is, a side project. We need to work on what the community really wants, bomb peg!

The BOMB Peg had quite a rollercoaster of a ride last week! Mainly around the launch of the PegHub presale. We got very close to peg, but then it seemed swing traders playing the rising BOMB peg brought us back down a little. As well, due to market conditions, there were more BTC Mainnet withdrawals than normal which forced us to do some minor BOMB sells to pay these out. With the crypto market appearing to stabilize we don’t anticipate many more such withdrawals and expect BTC SS to continue to contribute to raising BOMB Peg.

This is a pretty exciting one for me so I’m going to dedicate an entire section to it!

The revenue share automation is how we will automatically reward PHUB holders + stakers with revenue from the protocols. The information here is not required to take advantage of PHUB, its more just to provide an update on the development.

So far we have had our PegHub presale, and I have also launched two PegHub reward contracts where you can stake those PHUB tokens. The contracts used are almost identical to the BIFI Maxi reward contracts, for those familiar with BIFI.

Now the cool part! Another contract, called the PHUB Fee Distributor, has been deployed. This contract will automatically take any BTCB sent to it, buy PHUB on the open market, and then send those PHUB to the PHUB MAXI reward contract for PHUB staker rewards! This contract was deployed in such a way that it is upgradable in the future, for when we need to make changes to how buybacks will happen, or where to send rewards after the buybacks.

Anyone who wants to see this in action can send some BTCB (any amount works, can be very small) to the PHUB Fee Distributor contract and watch what happens!

What you can expect to see:

More information will be available in the next 1–2 weeks in regards to the full automation of revenue from protocols feeding BTCB into the PHUB Fee Distributor. Most of the work to be done still is related to having a contract receive protocol share tokens and protocol peg tokens (when boardroom is printing), and safely swapping small amounts for BTCB when conditions are right. This contract will be a continuous development, as it will be optimized until it is working flawlessly, and ensuring to never sell assets at times which are not ideal.

I spent a good amount of time today improving our auto compounding vaults at https://bomb.farm. Some of the improvements: 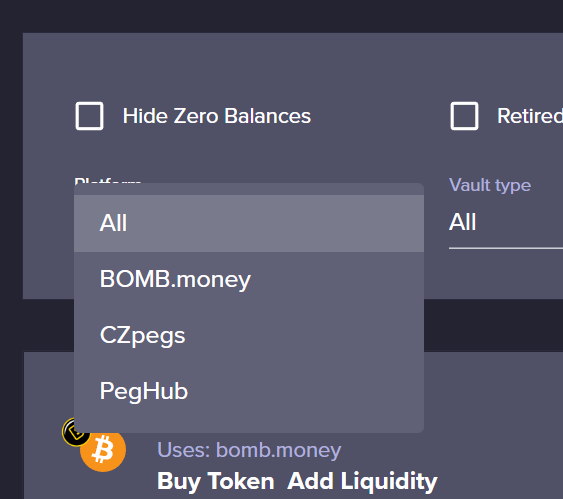 Filters on our bomb.farm app!

Its been a very busy week for me with handling all of the excellent applications I’ve gotten to fill roles here at BOMB.money! I still have several applications to go through and interviews to conduct for our COO role. I have started to hire for project manager roles and will be announcing the hires in the near future!

If you have a skillset that can help take the BOMB ecosystem to the next level, I want to hear from you! E-mail me at aaron@bomb.money and let me know how you can help!

Despite all of our efforts last week with Nodes and PegHub presale, we still struggled to reach peg on BOMB. As per the usual, I have a few more tricks up my sleeve to push us to peg and beyond!

Two major items, both of which I expect to drive heavy buy pressure on BOMB:

I am very confident when the above items are released, BOMB will be over peg, and be able to maintain it with ease. Load up now while it is a discount!

In addition to this, we will launch Nodes for CZpegs sometime this week.

We will be starting to plan out our next 2–3 multi-peg protocols on various chains immediately. We are waiting for everything to get setup for vote.peghub.com to be functional, but we will start conducting votes shortly regarding future multi-peg protocol launches! Stay tuned!

Despite being in what looks to be the deep of crypto winter, we will not stop building and adding value for all ecosystem participants and community members! At BOMB, we are nothing without our users, and will continue to do everything in our power to ensure every investment in a BOMB ecosystem project is a winner!

Let’s all order Lambos together!!