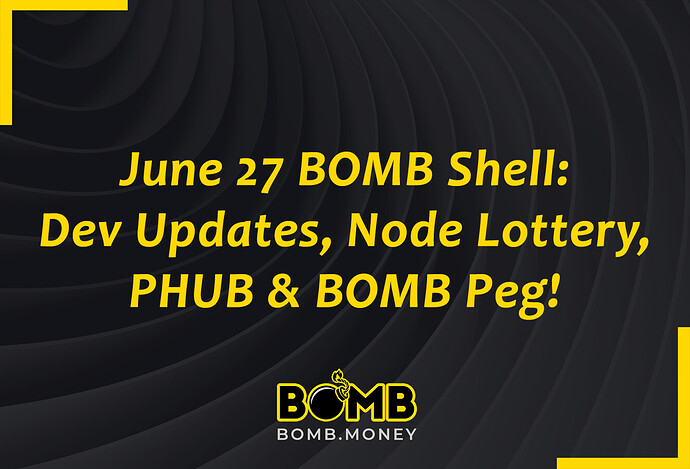 We had our first weekly BOMB Node (bomb.money) lottery this past week. For anyone not familiar, the node lottery is a weekly contest/lottery where all node participants are automatically entered! Prizes are 15 BSHARES to the biggest node buyer of the week, as well as another 15 BSHARES to a random node buyer/compounder. Each BOMB node purchased or compounded grants 1 ticket, and each BOMB-BTCB-LP node purchase/compound gives 10 tickets.

Congrats to both of our winners! Check out the winners here, where we will store the results of all lotteries: bomb.money

We did have some small hiccups with our automation in picking winners and sending out the prizes, but all has been smoothed over and will work flawlessly moving forward! The weekly lottery ends each Sunday at 18:00 UTC (6PM). At this time, prizes are sent out, and stats reset so the next weekly event can begin immediately!

Let’s get some big participation this week and see if we can get the biggest depositor to top what we had in week 1! Week 1 saw 1124 “tickets” as our biggest depositor. Keep in mind, BOMB-BTCB-LP count for 10, while BOMB nodes count as 1.

Some of you may have noticed I haven’t been in the communities as much as I usually am. I’ve been very busy in code, tying some other loose ends, continuing to interview for positions, and more based dev stuff.

Let’s get into things I have been building which will be production ready in the very near future!

There has been much demand for a yield generating deposit contract for BOMB, in order to increase buy pressure and assist us getting back to peg. While initially I was against developing this, I have learned that I need to do what the masses are asking for. I will go into detail next BOMB Shell on how exactly these contracts work, how to use ours, and the special differences we implemented to make ours the best ROI contract out there!

The one feature in certain ROI contracts that seems to drive big buy pressure is regularly occurring largest depositor prizes. We have seen some other protocols do these largest depositor draws once daily, but we decided to up the ante and do it 3x per day! It will work very similar to 8 hour epochs, in that there will be three 8-hour periods per day that all qualify to win the prizes. This allows users in any time zone to have access to 1–2 “epoch finishes” if they want to try to “snipe” the largest deposit bonus. It is going to be fun, and drive tons of BOMB buys in the process! Three times a day!! LFG!

I do already have a working version deployed on mainnet, with a page on our website to interact with it. However, it is not 100% safe to deposit into the contract, as there is a chance it may need to be replaced if certain aspects of it need adjusting. If anyone wants to try it out anyways, knowing they could lose their deposit, we can share the web address in our communities. I don’t feel right linking to it here in case someone has not read the disclaimers!

I went into a lot of detail about this last week, I suggest reading that first if you missed it.

The last component of the PHUB automation is the contracts that will take protocol revenue, convert it to BTCB, and send it to the PHUB Revenue/Fee Distribution contracts. As demonstrated last week during our Wednesday AMA, we have seen that as soon as BTCB is sent to the distribution contract, it automatically buys PHUB and sends it to the reward farm to be distributed to PHUB stakers.

This last contract that is being worked on, let’s call it the Asset Swapper contract. It isn’t an overly difficult contract to write, but it is a difficult one to get just right. What I mean by this, is that almost all revenue received will be in the form of protocol tokens. For BOMB, this would equate to receiving BSHARES and BOMB. For CZPEGS, this would be receiving CZSHARES, and all four peg tokens.

The challenges that need to be addressed before it can be used in production are:

Once the Asset Swapper contract is ready and tested, we can automate BOMB and CZpegs revenue to flow automatically, numerous times a day, to PHUB. This causes constant buy backs, which means higher token value, and more rewards for PHUB stakers!

From there, we will easily be able to automate revenue distribution from future protocols. This will also work for protocols we launch on other chains!

I do need to double check to be sure, but I plan to setup the Asset Swapper on other chains to bridge the BTCB over to BSC, and the receiver address on BSC will be our PHUB Revenue Distribution contract. This will allow any protocol on any chain to feed revenue multiple times a day for PHUB buybacks!

Ready for next week

I will have the ROI Investment contract ready for next weeks BOMB Shell. I’ll likely reach out to a few community members to try out it before then, especially those in our bomber-peggers special chat, but public release will follow not much behind… I am hoping to have a working version of the PHUB Asset Swapper as well in about a weeks time. I am sure it will need tuning and optimizing once it is complete, but due to how thorough it is being developed, it should work nicely out of the gate.

Besides what I just mentioned regarding the PHUB Asset Swapper contract, there is more PHUB to discuss!

Our voting site is now active! We will link to it from the PegHub website, it is part of our PHUB site redesign currently being planned/worked on. For now it can be accessed at vote.peghub.com.

Soon we will have our first series of votes related to chains to launch on first, and tokens to peg to. I cannot give an accurate date when these will be proposed as it is dependent on a few other things being ready first. We could have our first vote up in the next few days, or it could be sometime early July. I am pushing to have everything ready as fast as possible so we can continue to grow the ecosystem and bring value to PHUB holders!

PegHub will get a site redesign, sometime in the next few weeks. It will show stats and link to all other protocols in the ecosystem, as well as give stats on each protocol. These stats will be related to the protocol health, APRs, and revenue generation from each!

In addition, we have already began writing for a PegHub Blog. This is where you will find insights from myself and various team members on crypto as a whole. Topics will include market conditions, some dev/technical posts, and just general good content which anyone in crypto/DeFi should find interesting! It will improve our search engine optimization and give our website visitors a reason to stick around for a while!

Let’s talk about the elephant in the room — the BOMB peg. Or more accurately, the lack of BOMB being at peg.

A little while back when CZpegs launched, we all saw the amazing power of taxing token sales while under peg. Despite the mini bank-run we experienced on CZpegs during the Handford fiasco, the under-peg taxes have done a great job at preventing pegs from dipping much below 1.0.

The success of this tax has caused some discussions among the community related to BOMB having an under-peg tax. At first I was resistant to this as any core change like this would require redeploying contracts. Our BOMB token is already integrated in many other protocols and has full listings and credibility in DeFi. A redeploy would mean starting over.

Having said that, we have seen numerous mechanism/tokenomic improvements on CZpegs work flawlessly. Just because something would require a lot of work up-front, does not mean we should not explore if it would be worthwhile in the long run!

Discussion: BOMB Needs to hear from you!!

Before I go into the details of what a redeploy would look like, I want to really encourage community participation in the discussion and decision-making process here. I only want to do what is best for the community, and what the community wants. I already know the community wants and needs a BOMB token that can maintain peg — but we need to reach that goal with solutions that protocol participants are happy with.

Let’s have continued discussions within our Telegram and Discord communities, as well as on social media. I would recommend doing brainstorm type discussions on these platforms.

Once you have a refined and well thought out idea (or concern), I suggest moving it to our discussion forum at forum.peghub.com. Any ideas can go into the Community Ideas category. If it gets overwhelming, a new category will be created specifically for these types of posts. Please make sure to post at forum.peghub.com if you want us to consider your idea/concerns!!

There are several different approaches we could take, but not many that satisfy all requirements:

As mentioned above, (if we do a relaunch) I really want the ideas and excitement coming from the community. While I do think this is a good idea, it’s up to the stakeholders to ask questions, discuss their concerns, and suggest ideas on how best to accomplish this. Having said that, here is a rough idea of how it could work/look:

Relaunch BOMB, but using contracts very similar to CZpegs. This would include boardroom stake/unstake fees, adjustable taxes when below peg, and more than one peg token. We would be able to also create a new SHARE token which, like CZ, could run for two full years (or even longer) instead of the 12 months on BOMB which is concluding in November.

You may be wondering why launch another multi-peg protocol on BSC instead of just relaunching BOMB with BOMB as the only peg token. Here is my logic:

There is a lot to be said about pros and cons of this approach, or a relaunch in general, but let’s save that for some intelligent conversation/discussion over at forum.peghub.com.

Is a Relaunch Necessary?

While a relaunch is not “necessary”, it seems like an ideal solution to the peg issues, and comes with a wealth of other benefits. Although, we do have the ROI contract on the cusp of being ready, with 3x per day prizes. Popular opinion in our community is that this contract is all that we need to maintain peg.

To prevent this BOMB Shell from becoming a thick book, I will leave the more in-depth discussions to our forum and will talk about potential relaunch details in our upcoming live stream (Wednesdays at Noon Eastern / 4PM UTC) and twitter space Friday.

If you think a relaunch (to allow us to change core mechanics / add sustainability features) is a promising idea, and/or think a relaunch is likely to happen, better buy up BOMB under peg as you will get full 1.0 peg value on it soon!

P.S. My cat BOMBER has a new friend named PEGGER 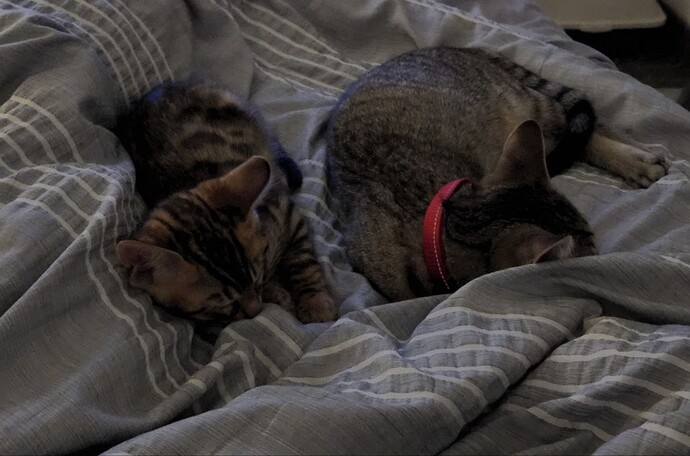 MR. PEGGER on the left, BOMBER on the right